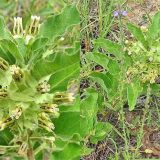 Pint plant from Carica papaya Solo. Grown on the Big Island of Hawaii, Solo is the principal variety grown in and shipped from the islands. This genetically engineered papaya is resistant to the ringspot virus disease. Its greenish-yellow skin turns yellow as the fruit ripens, and consumer testing has confirmed the extreme popularity of this golden yellow flesh variety. The Hawaii Papaya delivers superior taste and unsurpassed health value. Numerous scientific studies tout the benefits of Hawaii papayas as a perfect part of a healthy lifestyle. They?re rich in vitamins A and C, high in potassium and fiber and despite their lusciousness, they?re a fat-free, cholesterol-free treat you can enjoy guilt-free. Rainbow is a genetically engineered papaya of the Kamiya variety that is resistant to the ringspot virus disease. Impressive in nutritional benefits, papayas are high in vitamin A and antioxidants. Containing the enzyme papain, this fruit is said to aid digestion. Slightly lacking in acidity, a squeeze of lime juice enhances this fruits addicting flavor. Most commonly enjoyed fresh, papaya can be pureed or baked as well. Papaya can also be used to soften and tenderize thick meats such as roast beef or t-bones and spread mashed papaya over the meat and refrigerate about two hours before cooking. To store, refrigerate when ripe only. Use within a day or two or flavor will diminish. Native to the lowlands of eastern Central America, Portuguese and Spanish explorers fell in love with this special fruit and introduced it to other settlements in the East and West Indies where its Carib name “ababai” became papaya. Taken to the Pacific islands, papaya was grown in tropical regions by 1800. Today Hawaii is a main exporter. Virtually all papayas consumed in the United States come from Hawaii. More than 95 percent of Hawaii’s papayas are grown in the rich volcanic soil of the eastern end of the island of Hawaii. Zones 10 to 11.