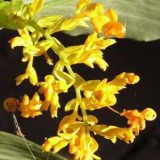 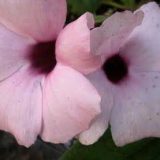 Seeds of this vine with Lime green to yellowish green, greenish white flowers are in pendent, round-topped, umbel-like clusters. The individual flowers are pea-like with a bent, upcurved keel. The flowers are followed by oblong, flattened, winged, green drying to dark brown bean pods lightly covered in stinging, orange-brown hairs known as trichomes. The seeds resemble hamburgers due to their disk shape and indented, black hilum (seed scar) and are almost 1 inch wide and brown, mottled brown and black, or solid black in color. The leaves are trifoliolate with 3 green, hairless or mostly hairless, broadly elliptic to egg-shaped leaflets. The stems are slender and twining. The vines typically hang down from the trees in green, leafy curtains. There are many species of Mucuna throughout tropical regions of the world, including M. urens, M. pruriens and M. sloanei. Most species of Mucuna are climbing woody vines called lianas that twine through the rain forest trees like “botanical boa constrictors.” Their bat-pollinated flowers and pods are produced on long, rope-like stems that hang from the forest canopy. The seed pods are covered with microscopic velvety hairs (called trichomes) that can be extremely painful if they get into your eyes. In the Caribbean region and Central America, the hairs were stirred into honey or syrup as a remedy to dispel intestinal parasites. The dense covering of irritating hairs may help to discourage seed predators, particularly when the seeds are soft and vulnerable. At maturity, each pod produces several hard, marble-like seeds. The seed is called “ojo de buey” because of its striking resemblance to the eye of a bull. The seeds are also known as “sea beans,” because they are commonly carried by rivers into the ocean. .