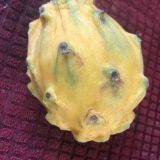 This is one of the most upright of the Miscanthus cultivars, and it is among the most colorful. Miscanthus sinensis ?Strictus? is best known for the unusual, horizontal yellow bands on its foliage and its erect habit. In September, reddish, fan-shaped seed heads extend about one foot above the foliage. Both foliage and flowers are used in fresh and dried flower arrangements. Porcupine Grass has markings very similar in appearance to Miscanthus sinensis ?Zebrinus? (Zebra Grass), but ?Strictus? has an upright habit. Zones 5 to 9.