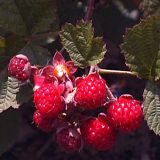 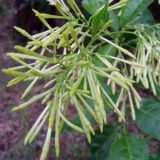 Pint pot of night blooming cereus, a climbing, almost vine like perennial. In summer, generally from July to October, large, prominent buds appear. When they are ready to open, they do so in a very surprising way, literally before your eyes you can see the opening. Cereus blossoms remain open only one night. After they close, they form red fruits, around four inches long, which are said to be edible. It prefers a well drained soil with organic matter added such as a mixture of sand and commercial potting soil should do. Feed it monthly during the growing period with water soluble 20 20 20 fertilizer diluted to half strength.