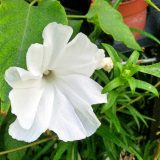 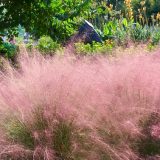 Quart plant from Hippeastrum papilio is an endangered epiphytic species within subgenus Omphalissa that, paradoxically, is increasingly propagated among gardeners while its natural range is degraded and diminished. The species was published as Amaryllis papilio by Argentine botanist Pedro F?lix Ravenna (Pierfelice Ravenna) in 1970, after a genus Papilio of swallowtail butterflies due to the resemblance of the inner tepals to the wing tails of the insects (hence, the common name of ‘Butterfly Amaryllis’). In 1997, Hippeastrum papilio was considered extinct in its natural habitat until the 1990s, when an Escondido, California plant breeder, Fred Meyer, observed it growing in tall trees in the southern Brazilian state of Rio Grande do Sul. It is native to tropical forests of the Atlantic Coast of southern Brazil. This species is quite constant in terms of the shape of its tepals, although the degree of lateral compression does vary. The color can vary from white through a creamy-green, to a quite dark apple-green with carmine, maroon or purple striations. It can bloom at any time in late winter to early spring. Zones 8 to 10