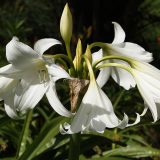 Seeds of Delonix regia is a distinctive tree with large, bright red flowers. The genus name is derived from the Greek words delos (meaning conspicuous), and onyx, meaning claw, referring to the appearance of the spectacular flowers. The tree is commonly cultivated in the tropics and subtropics, including Madagascar, for its ornamental value, but is under increasing threat in its natural habitat due to habitat destruction. A tree growing up to 90 feet tall. Its trunk is tall and unbranched, sometimes with narrow, spreading buttresses extending from near the base. The bark is pale grey. Royal poinciana is deciduous in climates that have a marked dry season, but in Florida and other areas where the winter is not that much dryer than the summer, it is a semi-evergreen tree. Hardy in zones 9b and above.