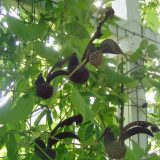 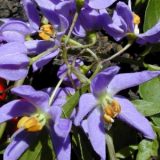 Seeds from Cucumis anguria Maxixe Prickly cucumber. C. Maxixe is a type of cucumber that was brought to Brazil from Africa during the slave trade. This crop was grown extensively in New England in the 18th and 19th centuries, known as West India Gherkin since it was thought to have originated from the West Indies. It was eaten raw and also pickled for consumption in the winter. Maxixe do Norte is the most popular variety of maxixe in the Northeastern states of Brazil where it is consumed boiled, fried, stewed or used in salads. The fruits of maxixe, which are about the size and shape of a chicken egg, can have either supple spines or smooth skin and are pale green in color. A nice change from the normal cucumbers.