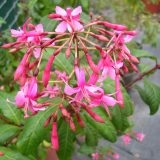 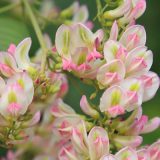 Seeds of Castilleja coccinea, commonly known as scarlet Indian paintbrush or scarlet painted-cup. Castilleja coccinea, commonly called Indian paintbrush or painted cup, is a biennial member of the broomrape family that typically grows on unbranched stems to 1-1.5′ tall. Best grown in medium moisture, well-drained soils in full sun. This species is primarily biennial: basal rosette the first year and flowering stalk the second year, with plant death occurring shortly after seed set and with new seed usually germinating in early fall. Species is also semi-parasitic in that its roots will attach to and absorb some nutrients and water from the roots of certain other plants. Evidence suggests that paintbrush will perform best in cultivation when grown in combination with one or more of the plants it commonly parasitizes in the wild. Common name of paintbrush refers to the supposed resemblance of the flowering plant to a brush dipped in paint. Hardy in zones 4-8.