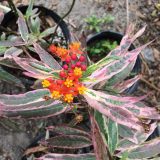 Seeds from Asclepias californica or California Milkweed. A gray and very wooly-haired perennial which in this family can grow up to two feet high with large, opposite leaves. The flowers are pink to purple or maroon, and the expanded structure between the anthers on the central column is hoodlike, dark purple, and situated lower than the anthers. The fruit is narrow and podlike with numerous silky-haired seeds. Like other drought tolerant milkweeds, the stems and leaves are covered with a thick covering of long hairs giving the plant a woolly appearance. This plant can be found growing on slopes in clay and sandy soils. If blossoming, the violet flowers contrast starkly with the woolly appearance of the foliage. Grows well on Dry slopes, canyons, foothills with chaparral or woodlands; also disturbed areas and roadcuts. Hardiness Zones 7 to 10