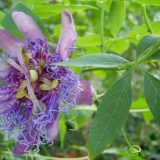 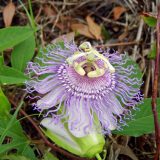 Quart plant of this low growing vine called Aristolochia serpentaria or Virginia Sanke Root. Can sometimes be found growing from Connecticut to southern Michigan, and south to Texas and Florida. It is considered endangered in New York and threatened in Connecticut, Illinois, and Iowa. A wildflower that is becoming endangered in most areas. Flowers are produced at the base of the leafless stem area in June – August.